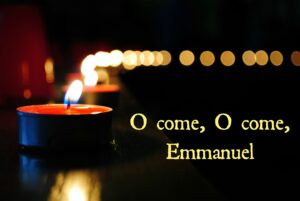 Advent hymns speak to the longing in our hearts for the coming of Christ. We sing them each year during this holy season, embedded with rich and deep significance for all. By far one of the most popular, and my personal favorite, is “O Come, O Come, Emmanuel” with 7 grand stanzas. Each verse known as one of the “O Antiphons.” Each of the 7 “antiphons” depict 7 “types” of Christ presented to us prophetically in the Old Testament and fulfilled in the first Advent of Christ’s incarnation recorded in the New Testament.

The term “antiphon” literally means “opposite voice” or “responsorial voice” as would occur between a choir and congregation, a call and response. From one to another, the voices call out from side to side, back and forth, to and from. The Antiphons in this hymn are filled with “alternating” voices of meaning, from the Old to the New Testaments, from the prophecies foretold of Christ to the fulfillment thereof. From the prophetic not yet to the present already and onward to the future not yet…a groaning of sorts in anticipation of Christ’s coming, in His incarnational arrival as a child, and in His future coming in yet-to-be-revealed glory.  The antiphonal voices of the prophets are joined responsively by the king himself, Jesus, and his faithful disciples then and now.

This ancient hymn was originally penned in Latin in the 12th century (Veni, Veni Emmanuel). The version most often used today was translated into English in 1851 by John Mason Neale and includes three more verses than Sufjan sings.

The hymn was inspired by the traditional O Antiphons sung at Vespers services during the final seven day stretch of Advent. An antiphon (from the Greek anti + phon meaning opposite + voice) refers to a call and response mode of singing. The seven O Antiphons are comprised of a title for the Messiah from the prophet Isaiah: O Sapienta (Wisdom), O Adonia (Lord), O Radix Jesse (Root of Jesse), O Clavis David (Key of David), O Oriens (Rising Sun, Morning Star, or Day-Spring), O Rex Gentium (King of Nations), and O Emmanuel (God with us).

A fascinating fact from the O Antiphons is that the titles for the Messiah in reverse order Emmanuel, Rex, Oriens, Clavis, Radix, Adonia, Sapienta form an acrostic ERO CRAS in Latin, which is translated “I will come tomorrow.” Those monks who wrote and arranged the lyrics to the O Antiphons married theological and artistic creativity in a fabulous way.* We will consider one of the antiphons each day prior to Christmas Eve.

That mourns in lonely exile here, until the Son of God appear.

This first “type” of Christ, foretold in Isaiah and revealed in the gospel of Matthew, is Emmanuel. The “with us” God is prophesied and fulfilled in Christ Jesus. He came to us in the flesh as a baby boy, and He comes to us and abides with us as Emmanuel. His coming sets the captives free, provides companionship for the lonely, and ongoing hope for all who mourn in places of exile and wandering from God.

Invite Jesus to come into the inner recesses of your heart today to set you free, provide intimate companionship, and convert your anxiety into hope.

*Special thanks to Kevin Antlitz for his excellent blog insights on the O Antiphons (in the introduction above) which can be found at transcendentalish.com – check it out!