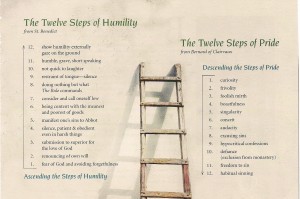 Chapter 7 of Benedict’s Rule of Life is about “Humility” as introduced in the previous entry. Here we will consider each of the 12 steps of the Ladder of Humility.

For Benedict, ascending all these steps of humility is how the person arrives at the doorstep of perfect love of God, which casts out all fear. What may start out being lives of love performed out of dread, will now become more naturally lives filled with the expressions of good habit and delight in virtue – all out of love for Christ. “All this the Lord will by the Holy Spirit graciously manifest in his workman now cleansed of vices and sins.”

Imagine for a moment if each of your words, attitudes, actions, and interactions were a reflection of the humility of Christ, expressed through you and for God’s glory. What would be your most dramatic impressions of loving humility shared possibly for the very first time?

Consider crafting your own rule of life and join the community of other like hearts and minds at www.RuleOfLife.com