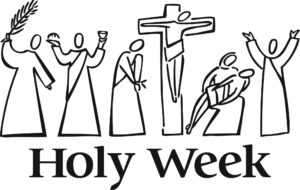 In this Holy Week series I would like to invite you to consider Jesus’ “outstretched arms of grace” toward all who followed him as disciples. Many sought to emulate his humble life, obedient self-sacrifice, and unconditional service to others…what will be your response today? As you pray and reflect, behold his glory, believe his message, belong as his beloved disciple, and become more and more like his image, with more of your true identity in Christ Alone.

Jesus knew that the time had come for him to leave this world and go to the Father. So, having loved his own who were in the world with him, he now showed them the full extent of his love.

As the evening meal was being served, he got up from the table and took off his outer clothing, and wrapped a towel around his waist. After preparing himself to serve his brothers, he poured water into a basin and began to wash his disciples’ feet, drying them with a towel that was wrapped around him.

Peter didn’t quite understand what was happening and initially denied Jesus the privilege. But after Jesus explained that “unless I wash you, you will have no part with me,” Peter not only presented his feet, but asked that his hands and head be washed as well. To Jesus, simply holding and washing their feet was enough of a bath for his faithful followers…including the one who would deny him and even the one who would betray him. Here again we see the Lord extending his outstretched arms of love.

When he was finished washing their feet, he explained why he had done this simple act. As their Teacher and Lord, having washed their feet, he now requested they wash one another’s feet. “No servant is greater than his master, nor is a messenger greater than the one who sent him. Now that you know these things, you will be blessed if you do them.” And then he proceeds to predict his upcoming betrayal and denial by two of them who had just experienced the full extent of his humble love.

By far one of the most intimate moments, the washing of the feet was one of Jesus’ final expressions of love to his disciples. To hold their dirty feet in his gentle hands, pour water over them to soothe and bathe as with a cup of salvation, was all he needed to do. He simply wanted his disciples to know that his love was genuine, and his desire for them to do likewise was pure. The ministry of soul hospitality at the table, surrounding this meal, was rich and abundant for all, even for his confused betrayer. Jesus knew his time had come. His days were numbered. His legacy would live on in love.

If you’ve ever had your feet held and washed by another you know how meaningful it is. Imagine Jesus stooping down in front of you, holding your worn and weary feet, looking up at your face with loving affirmation, looking down at your faithful feet, and praying blessing over your walk of faith. He knows your need for cleansing and forgiveness. He is fully aware of every heartache you hold, every pain you’ve suffered, every joy you’ve experienced, every longing your desire. Will you let him love you?

Behold the Savior kneeling lovingly and prayerfully before you; believe in the gifts of grace and mercy he delights to bestow; belong to the fellowship of foot-washed disciples; and become a disciple who is more than willing to wash another’s feet in Jesus’ name.

For additional reflection today, prayerfully consider the words of this ancient Holy Week hymn, “What Wondrous Love Is This O My Soul” (Anonymous, 1811}: