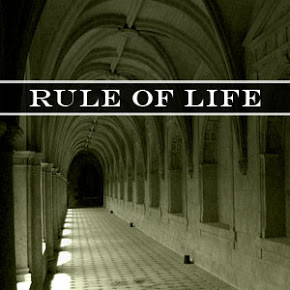 When St. Benedict wrote his famous “Rule of Life” for the community of brothers that would join him in this unique endeavor, he penned a fabulous Preface that’s chock full of invitation. He quotes from the Scriptures and bases his Rule on the Biblical text as the primary guide for this shared life of prayer. In fact, the Rule is basically about two main issues: community (their life together) and contemplation (their commitment to prayer).

He writes, “Let us open our eyes to the voice from heaven that every day calls out this charge: ‘If you hear his voice today, do not harden your hearts.’ And again, ‘You that have ears to hear, listen to what the Spirit says to the churches.'” Over and over again he cites over a dozen such passages, all of which are calling them to a posture of listening and attentiveness to the voice of God as articulated in the Scriptures. His focus on the teachings of Jesus is best summarized in the Matthew 7 analogy, “Whoever hears these words of mine and does them is like a wise man who built his house upon the rock; the floods came and the winds blew and beat against the house, but it did not fall: it was founded on the rock.”

Benedict’s Rule was and is today founded on the Rock, the Scriptures which guided him to these sentiments about life together in godly community. “Therefore we intend to establish a school for the Lord’s service. In drawing up its regulations, we hope to set down nothing harsh, nothing burdensome. The good of all concerned , however, may prompt us to a little strictness in order to amend faults and to safeguard love.” These are a few of my favorite sentences in the Preface!

Nothing harsh, nothing burdensome…instead, the emphasis was to be always on life! The particulars of Benedict’s Rule were very specific, but not at all with an intention to harm or hurt those who would participate. The intention was that all would flourish, and indeed they did and remain so today.

A little strictness in order to amend faults and to safeguard love…this short statement in itself is full of great wisdom. If only churches and communities of faith would have a similar guideline today. A little discipline goes a long way toward reconciliation, which always has the preservation of love as its focal point.

What from this portion of the Preface feels invitational to you today? To posture your life around attending to the voice of God, primarily through His Word? To be sure that all expectations within your faith community are focused on living an abundant life together? To consider how best to adhere to a little strictness in order to create an environment of reconciliation and love?  These are just a few ideas to prayerfully consider…let me know how the Lord makes his voice clear to you!